While I initially tried to keep my posts limited to the scope of the Indie Author Journey, what I’m finding is that the Indie Author Journey gets boring! You write, edit and format until your brain gets very angry, exhaust all the cheap marketing strategies you can find on the internet for little ROI, read many…many…best strategies/helpful tips articles, and make a whole lot of missteps, all while hoping for the lottery chance that your indie title will land in the right hands that send it viral. Eventually, the amount of unique writable content you can recount dwindles unless you’re constantly working on new novels/projects. As I’ve mentioned before, I’m not a writer first, it’s just one of my indulgences, so why not have my site reflect the eccentric ninja that I am?

So let’s talk about BoroughCon, which described itself as a brand new Comic/Sci-Fi/Gaming convention that I would classify as indie because of its newcomer status. Today was the final day, and I attended Saturday with my boyfriend and sister (this was her first con as well) in tow, after randomly seeing an ad for it at a bus stop. Oh, and of course, My First Cosplay. 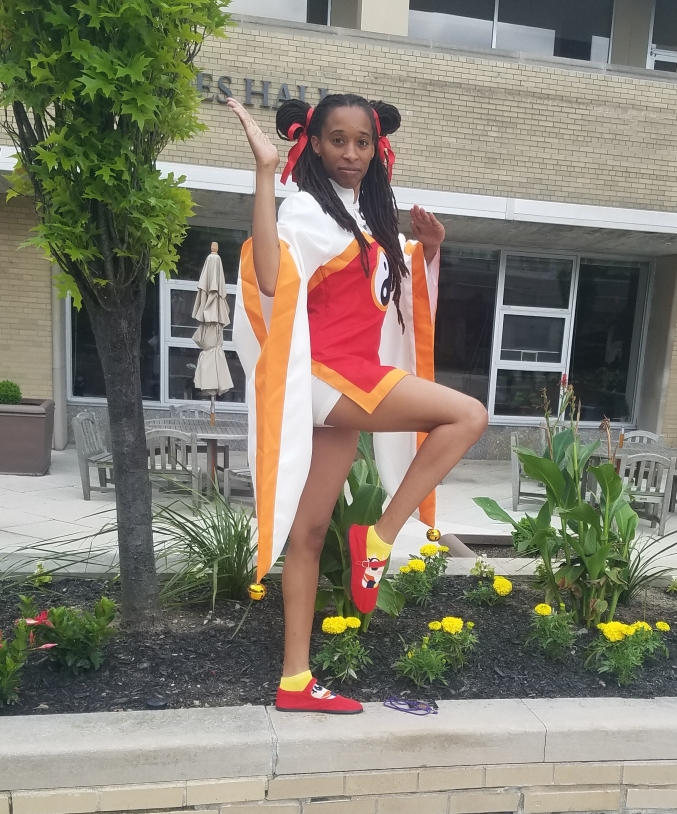 The first orderable costume online I ever encountered was Meilin’s from Cardcaptor Sakura (and let’s be honest, that whole series is chock full of banging costumes I’d love to get my hands on if done with quality), and this was while I was in high school, maybe even junior high. I favorited that page and vowed to save up enough for it, then went to college and forgot. Over 10 years later, I remembered that costume and Meilin’s was the first to enter my collection. Those hanging bells are real, by the way, and I had to focus on not whacking anyone with them on the subway.

First-year cons have a reputation for being not-that-great, but I wholeheartedly dived into this one because I…<3…indies! This was my third con experience (I don’t count Sakura Matsuri). My first was last year’s Castle Point Anime Convention in Hoboken which my boyfriend, a veteran of cons, introduced me to. I was immediately jealous of those in character, because it had always been my ridiculously nerdy dream to have the money (because I surely don’t have the skill) to procure an anime/video game outfit and then actually have a place to wear it to. I also attended Liberty City’s con in Times Square last year, which was another first time con. I had no problem with BoroughCon’s first-time status and I absolutely wanted to support them, especially since they were in Queens, fairly accessible by the subway. I found St. John’s to be an excellent space for it; I think colleges provide great venues for this sort of thing.

Now yes, there was a light turnout (the hotel that hosted Liberty City’s con last year was crammed), but that meant more space in the gaming room, because Liberty City’s game room was tiny and packed, and I didn’t even try to jump into the throng to wrestle a controller away for a spot. BoroughCon’s gaming room was spacious enough, and I was able to Smash it up for a good chunk of time there with fellow enthusiasts, and collect wins with silent grace like a ninja. I can’t speak for the con programming because the only one I attended was the Cosplay Fashion Show, which has become my no-miss-attendance event at these things. I felt they could have explained the divisions a little more, because I had no idea what the categories like “journeyman” etc…actually meant. A staff member tried to get me to join, but A. I’m still way too shy for that and B. although this was my first cosplay I can already say I don’t make my own costumes. I wear it for the spirit and my own personal dedication, but not as a finalization of my own craftsmanship.

All in all, I simply had a good time mingling with like-minded individuals. With the exception of the somewhat bumbling front deskers, all staff were incredibly friendly, randomly stopping us to let us know what programs were about to start, asking if we were lost, or complimenting my costume. It had a very chill vibe that I respected, and the Dealer’s Hall/Artists Alley was also cavernous enough (with much free candy!), though I was the only one in my party who declined to part with my gald. Thankfully, I’d scoured the Internet for tips for first-time cosplayers beforehand and learned that a mini-sewing kit is an essential item to carry, since one of my shoe straps broke while traversing the Dealer’s Hall, which could have ruined the whole day for me had I not been prepared. I was also prepared for the many deeply curious looks as I shuttled from Harlem through the subway to Queens in costume. I can’t wait for more and would definitely return to BoroughCon as they grow and become more popular!