I remember the very first video game guide I ever set eyes on. It was the Perfect Guide for Legend of Zelda: Ocarina of Time. And it was beautiful. I carried this book with me everywhere, delighted by the whimsical, high-quality images and the nerdy-yet-awesome writing style. It was riddled with jokes that even I could pick up on at that age, snarky at times, other times conveying an array of emotions from shock to disgust to adoration at the game’s moments. I felt like I was carrying around my friends in this glossy magazine.

I wore it down to tattered pages, the spine dislocated, the creases permanent. Because I’d studied the guide so much, I could probably still do an Ocarina of Time run-through with 100% completion off-top.

But once you start, 100% completion haunts you.

While Zelda isn’t technically an RPG, it has mucho similar elements. RPGs have always been vast worlds that maybe started out with a 20-25 hour running time, and can now amass over a whopping 100-hours of gameplay when you factor in sidequests, unlockable bosses, highest weapon attained, etc… No complaints here. But somewhere along the way these clever additions became cruel tricks. Missable sidequests if you don’t talk to this specific person in this one town directly after an event happens. Ridiculous formulas that involve gathering/fighting/completing tasks in a maze-like way to open a secret path. 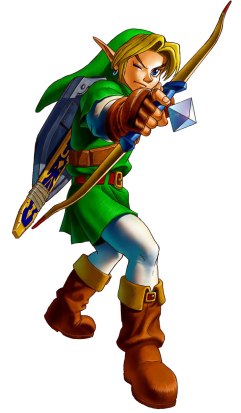 Bosses that can’t be beaten unless you’ve mastered a certain skill paired with a specific type of armor with a 7% reflective rate, so you just hope you’re in the lucky 7% (which you wouldn’t have figured out without seeking help online). That Shuttle Crash site battle with the suicide android in Tales of Graces? THAT WAS MEAN. The Land of Canaan in Tales of Xillia 2? The most sadistic dungeon I have ever countered. So much so that it makes the infamous water temples in Zelda look like wading pools. And let’s face it, the raising and lowering of the water temples in Ocarina of Time was a difficulty beyond its time. Would anyone nowadays have the patience and focus to figure that out with no outside assistance? (I’m familiar with the younger generation and based on their social media trends, I HIGHLY doubt it).

Thankfully, accessing a guide, or FAQ, when things get rough is only a Google click away from your fingertips. Stuck on a boss? FAQ it. Can’t find the next town? Look it up. That final mushroom needed to make that healing nectar for the sick boy in the forest town eluding you? Search it. The convenience in these answers is a gift, but the curse lies in the necessity to look it up anyway to progress.

After I fell in love with the perfect guide, before I’d start an RPG, I’d have the FAQ bookmarked and ready. I’d consult it before every move I made. I beat Tales of Symphonia easily enough on my own, but when I discovered the guide later I realized I missed out on SO MUCH SHIT. And I’m one who knows to explore every path, click every crevice and talk to every person in town. Somehow I’d still missed out on a good 30-40% of the game! Who could have known how to meet Abyssion on their own? I don’t believe you. And let’s face it; Majora’s Mask was in no way completable without the use of a guide. The Kafei sidequest? Yeah the fuck right. The game was an ingenious concept, but it was TOO SMART. The difficulty level certainly landed it on many’s Most Hated Zelda Games lists. And Skies of Arcadia…while the main story was achievable enough on your own, find me someone who actually discovered the Wanderbirds on their own (unless it was by pure, dumb-luck accident). These development choices almost had me entirely dependent on FAQs.

One day I realized I wasn’t having as much fun consulting a guide for every move and double-checking every step I took to make sure I didn’t miss anything. If 100% completion was going to drive me to madness, then maybe it wasn’t worth it. I couldn’t let a goal like that ruin the lighthearted reason why I play in the first place.

Have I abandoned FAQs completely? Absolutely not. But they’re not the same friends I carried around in my backpack so long ago, reading and re-reading with joy. Most of them are clones of one another. The writing doesn’t pulse with a vibrant personality. Unless it’s a leader like IGN, it probably wasn’t done by someone with writing skill, meant to entertain and feel like you’re conversing with them.

I reverted to playing to the best of my ability, scrounging in every corner, busting into everybody’s house and talking to every single person. And if I get too stuck, like I’ve-struggled-for-hours-and-I’m-at-my-wit’s-end stuck, I look it up. But I try not to do it often because I love the sense of accomplishment I feel at finally figuring out what I was struggling with, using my own brain and not the Internet’s. I consulted an FAQ for Twilight Princess just once, and felt supremely proud of myself. Since Symphonia 2, I’ve traversed through subsequent Tales games without an online “map,” back to old-school roots. Like when there weren’t save points. And when you were stuck on something, you could only find out the solution by pouring in hours of puzzle-solving, or getting lucky by knowing a friend of a friend, (or cousin) who knew the answer. If they say there’s two kinds of players, there’s gotta be a happy medium between them. Where you can hunt and gather, but also have fun doing it.

The latest thing is 100% IV in Pokemon GO. I don’t use an external IV app for the very same reason. Landing a 100% IV Pokemon is 100% luck. You have 0 control over it. I’d rather play a game I love and be happy with whatever I do accomplish, than stress myself out trying to attain something I have absolutely no control over. If it’s meant to come, then it will.

100% completion is to achieve perfection. I no longer beat myself up over not achieving perfection. And I think I’m better off for it.